The man behind our food & drink

Signet Hotels Culinary and Operations Director is Ronnie Kimbugwe, whose background includes over six years with the Gordon Ramsay group at Claridges and the Bel and Dragon Country Inns, where he created an extraordinarily successful group of gastropubs across the South of England.

Ronnie believe that “Good food is nurturing, it’s restorative, it brings people together. It’s why we champion British produce, local, independent growers, and suppliers we know and trust. We will serve our guests heart-warming and memory making dishes, done properly, genuinely”.

Sustainability is a key driver in determining the menus and culinary operations at The Mitre. In addition to locally sourced produce, Ronnie will grow herbs on the orangery roof, and house beehives on the main roof where they will also smoke their own salmon. 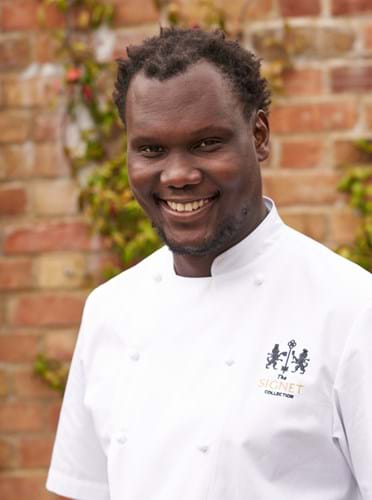 A Chef on a mission, Ronnie is passionate about reduced food waste and has partnered with Hampton Courts gardeners to produce vegetables to ensure that no food waste goes to landfill. The Mitre also brews its own beer available on draft, called “The Six Wives”, a delicious light, floral and hoppy ale, made in Hampshire specifically for the hotel and named after the number of wives King Henry VIII had.

Ronnie’s earliest food memory is of cooking crépes and trying to flip them, whilst standing on a chair next to his grandma in Uganda. His curiosity about food was further ignited during his teens growing up in Devon where he realised the enjoyment derived from entertaining people through food and drink, and as a way of giving something back.

When he is not in the kitchen, Ronnie can be found hosting events that entertain and inspire locals and guests alike, with Charity Bake Offs, Children’s cooking activities & Supper Clubs always drawing crowds. He is passionate about team culture, training young chefs and giving back to the local community via root to table, farm to fork.